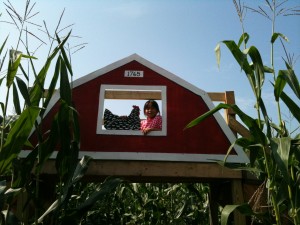 Corn maze! 85 degrees in the corn maze, but: corn maze!

Rory is alone in the picture because the last time we went to this farm, I apologized to one of the people who works here after overhearing him tell her not to touch something, and he came over to me, and I said I’m really very sorry, again, and added that if he had one thing on the whole farm that she shouldn’t touch and he hid it under his bed she would find it, and then he said that this was in fact the fourth or fifth time he’d told her (I’d been paying for the berries we picked).

Which wasn’t a good thing.

And so on this visit (a week later) Rory was the only child who could not go into the corn maze without a grown-up. Wyatt went with Sam. Lily went with her friends. Rory was stuck with me.

I’d say she’ll listen next time, but I’d be lying. She’ll grow out of it!

One Response to “Fall is Apparently Here”