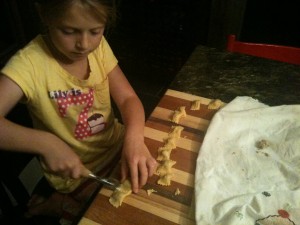 This morning Lily looked straight at Rob, and lied.

Not about anything big. Rob said, “Did you do breakfast hokey?” (One of her jobs this week, running the hokey over the rug tiles under the bar where they eat breakfast.)

I knew she hadn’t. I knew it by the half smile, and by the fact that I’d been in the kitchen all morning.

And there it was. Lily does lie, and we know it. Know it to the point where we won’t check on Sam or Wyatt for some things, like whether they brushed their teeth, but will on Lily every time. She lies to make herself look better. Exaggerates the number of minutes she’s read on her sheet for school. Lies to protect herself. Lies because it seems easier. Lies about her jobs, likes about who’s hit who, lies about whether she was the one who messed up the art supplies or didn’t throw away her popsicle stick. We catch her every time and it doesn’t matter. She still keeps lying.

I was torn. It seemed like time for a big come-down, but what? The most obvious thing was to make her miss her new afternoon gymnastics class. But I already paid for that. It’s all set. I didn’t want to make her miss it. Maybe, I thought, I could tell her that she was invited for a sleepover Friday night and now she can’t go!

But that would be a lie. Oh yeah. Then Lily piped up from the back seat (knowing, on the ride to school, that I was thinking about how to punish her) “Am I not going to gymnastics?” So there it was–the obvious punishment, and we both knew it. She came home from school at two (it’s early release day), giving up our usual go-for-a-snack together and went straight to her room until gymnastics would have been over at 4:30.

Not without comment, mind you. There were tears. But she got over it. She stayed. (I think she enjoyed being alone.) And maybe it will teach her something, although I kinda doubt it.

And then we went to the farmer’s market, and then we came home, and she made 49 ravioli to take to her classroom tomorrow for her “unique week” snack all by herself. I rolled out the dough, and she stuffed and folded. That’s my girl. Unfortunately, that lying child who wants to make herself look good, or get out of trouble? That’s my girl too. 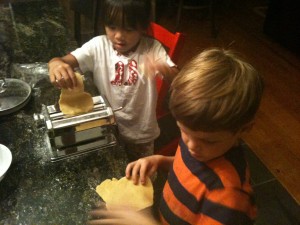 And in the background, the other show goes on.