Nothing Slips Past Us, Here

I didn’t actually buy new slippers for anyone.

Rory and Wyatt need slippers for school, and I must have bought the ones we found in a closet today on sale at the end of the year last year. Then there was a larger pair for Lily that I vaguely remember buying in the distant past, on the theory that she would grow into them eventually, which she has.

The problem, of course, is that Rory’s new slippers look like this: 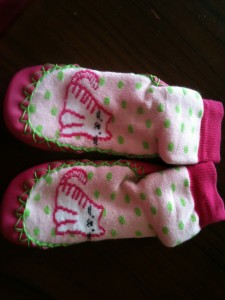 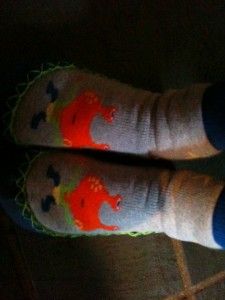 Monsters. Again, perfect. Rory is mad that I took a picture of Wyatt's slippers with his feet in them, and hers without. She says "I wan' you take picture of MY feet!"

While Lily’s were plain pink. I think I purchased them years ago, before they even came in cool patterns. I think I purchased them before Rory was even a gleam in my crazy eyes. But Lily saw it all as a plot. Rory always gets better stuff than I do, she roared, ridiculously, as the person who always, invariably gets far more new things than poor hand-me-down sister. SHe was peeved. She threw her slippers on the floor in a pique. And then she sniffled.

And I sat there. I could teach her a lesson, of course. Just take the new slippers. Plenty of kids who would be glad of new slippers, and whatnot. But Lily, although she does in fact come in a clear first on the clothing-o-meter, really does trail more than a little on the attention scale. Circumstances, not to mention her own special ability to piss me off right before I’d planned to do something with her, often bite her in the butt, and they were about to do it again–my babysitter’s sick kids meant that instead of our special afternoon together (which was ruined last week by her punishment for lying), all four kids will be tagging along to Lily’s gymnastics class. (That’s one of the circles of hell, you know. The teeny tiny stinky dusty balcony at the prefab gymnastics building with Rory and Wyatt. It’s going to suck far worse to be me than her–but letting that go for the moment..)

Wasn’t there anything else to be done about the slippers?

I actually thought there was. 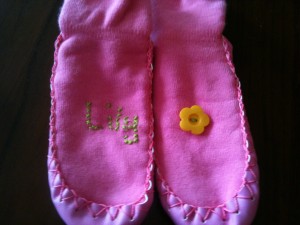 Lily thinks (for a few minutes, anyway) that I am Martha Stewart and the coolest mom ever, all rolled into one.

One Response to “Nothing Slips Past Us, Here”