Always the Mom Who’s Behind 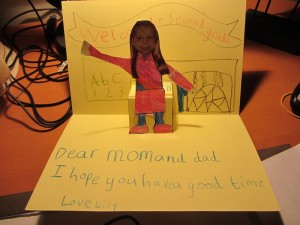 "Lily" welcomes us to second grade!

Tonight was “open school night” or “back to school” night or something like that at Sam and Lily’s school. No kids, just parents in the classroom. Don’t tell Lily, but because we’ve been second grade parents before, we defaulted more towards Sam’s class, although Rob went to her teacher’s main presentation, and I rolled in for the tail end and to ask a key question.

In Sam’s class, though, I focused. I listened to the lovely, lovely teacher. I copied down a list of “folk songs” they’ve been singing, which includes Joni Mitchell, Simon and Garfunkel, Bob Dylan and the Beatles (like I said, lovely teacher) so I could download him a playlist from iTunes. I thought about what a great year it was going to be. And then somebody said something about a geography testâ€”last week. And then somebody ELSE said something about ANOTHER geography test. And then, in the “specials,” it got worse. In math there was a test. And all the parents were wondering how to help with word problems. have there been word problems? No one said anything to me about word problems. And there was some discussion of something called “Investigations.” I finally put my hand up. “Am I supposed to know what “investigations” are?” (Something they do in class, apparently.)

I left with my tail between my legs. How am I going to help Sam get organized, when I myself have made it through three weeks of school (maybe it’s four) without being organized enough myself to sit down with him on Monday and go over his week’s assignments like we decided to do at the beginning of this year? How could I not know know there were tests? Why does he not tell me, certainly, but it’s not as if that’s a new problem. Sam is happy-go-lucky. I don’t consider it my job to cure that. I do consider it my job to provide at least one more shot at success by reminding him that he does better on tests if he studies for them. I think that’s fair and decent parenting, there. A standard I am apparently not meeting.

I was feeling proud, because he’d accomplished both a math journal and a french assignment last week, without any impetus from me, before they day before they were due, if you can follow that. He gets that it’s better not to wait until the last minute if you have time now–an amazing achievement for a fifth grader, right? That was me, encouraging him to do just that, all last year. See, I did a good job! But apparently I’m not DONE with my job.

We worked on studying last year, too. Sam tends to think he knows the stuff they’ve learned in class, because he does know it, if he’s looking at it. Hell, I can remember all kinds of things if I’m looking at them–the first ten amendments, the phrase written on the side of a bottle of Budweiser… A test, of course, is a different animal. Better to learn that now, certainly. I’m not particularly bothered about the not-so-great test scores. He’s a fifth grader. I’m bothered that he didn’t tell me about the tests and that i didn’t have sense enough to figure them out, especially since, now that I come to think of it, there was some discussion of a test, in front of me, last week that I didn’t follow up. I meant to follow it up, I really did, but something apparently got in the way. I think that was Wednesday. I have no idea what was going on on Wednesday, but it was apparently not conducive to in-depth discussions of school schedules. Let’s ignore the fact that that was six days ago. It would have been too late to study for the test after a couple of those days, anyway. I think. I still don’t know exactly when this test took place. It’s all unclear.

So, back to school night (if that’s what it was called) is wake up to school night for me. Oh, yeah, we’re BACK. Back to homework. Back to checking schedules. Back to not deciding to spend the afternoon Halloween decorating before leaving poor Sam in charge of his siblings AND needing to do his homework. Back to being responsible, with them and for them and, when it’s necessary, instead of them. It’s not enough to make sure they have time to do the homework. I think it’s my job to help them learn how to make sure that EVERYTHING that needs to get done gets done. I mean, arguably he would learn that if I just sit back and do nothing, I guess. That’s surely what Parenting on Track would say. But he’s a fifth grader, and all I’m talking about is sitting down at the beginning of every week to check in about what’s coming up, and remind him of a few ways to increase his odds of a successful week. After all, school is what’s important to meâ€”-not hockey, even though I think I spend far more time asking if he has his hockey gear together and how he feels about tryouts than I apparently do inquiring about tests. I tend to think school’s importance is a given. I think I’m wrong. What’s a given is that where we put our time and energy with him is where he’ll put his time and energy.

I feel good about protecting our home time this fall–but we’ve also been enjoying it. I like to leave lots of open time, and it looks like maybe some of that open time should have been a little less open. I love our school, and I love Sam playing hockey, but there are always far too many nights when hockey and homework are all that happens. I think I’m bummed that that he–that we–are already there. And, away we go again.

I think what I really ought to try to do this year is savor Lily’s being only in the second grade!

2 Responses to “Always the Mom Who’s Behind”