That Perverse Pride We Take In Our Weird Families

by KJ in Connecting the Dots, Feeding the Devils, Raising Devils

This could end really well.

Lily requested cheeseburgers for dinner tonight on this, a fantastic day for grilling, and cheeseburgers she shall have. And, she said, those french fries you make, by which she means the Yukon Golds in cold peanut oil from Cook’s Illustrated. But I stopped by the farmstand on the way home for the potatoes, and they are unquestionably not Yukon Gold, but some type of russet. And when a Cook’s Illustrated recipe says, as this one does, this will not work with russet potatoes, you listen.

So I shifted to their oven french fries recipe. And for good measure, because even though we eat plenty of vegetables, you can always use a little extra vegetable, I decided to put some carrots in. Why not Carrot Oven Fries, I ask you? There’s probably some reason why not, but I don’t know it yet.

I may be able to tell you later. 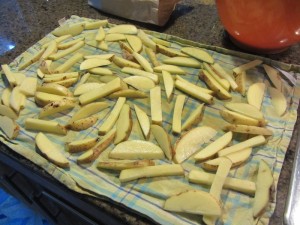 Look at those even slices!

So, as directed, I sliced the potatoes in even wedges and soaked for ten minutes in hot tap water. Dried them on a kitchen towel. Preheated the oven to 475. (Popped the carrots, tossed in a little oil and salt, in for a pre-roast. I think they take longer than potatoes.) The instructions said to put four tablespoons of oil in the sheet pan. When I pulled the sheet pan out of the sink, I realized it just happened to already have four tablespoons of oil in it. More, probably, in the form of bacon fat from this morning’s breakfast, cooked on said pan. 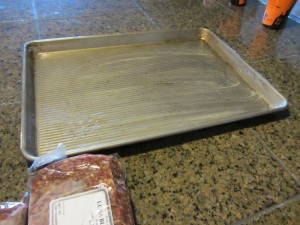 I could wash it.

Or I could just cook the potatoes in the bacon fat. Yes, that’s been sitting in the sink all day. It’s going to heat up to 475, I tell you, what bacteria could possibly survive that?

You can just guess what I did.
Meanwhile, this is why my cheeseburgers are so good: 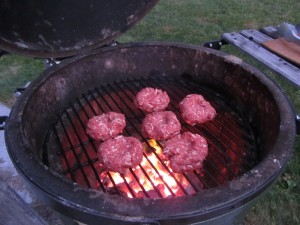 And there was this: 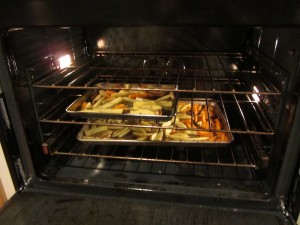 Smoky goodness on the fries, too. The one thing I knew for sure about this is that it would set off the smoke detector.

Ultimately it did end well. The fries were good, the “carrot fries” actually even better. But there was that moment, a moment we actually enacted this morning, too, that reminded me of how we all take a perverse pride in our own quirks, and the weirdness of our families.

I knew the french fries would set off the smoke detector. Bacon always does, and why would potatoes in bacon fat be any different? It is possible that our smoke detector is vegetarian. So as I flipped them one last time, the beeping began, and I was in mid sentence, resulting in this:

Sam found that endlessly amusing. They all love the smoke detector rigamarole. I realized this morning that Rob really hadn’t seen it, I think because bacon is usually part of breakfast-for-dinner, which we usually eat when he’s not home, but when I opened the oven door to take the bacon out, I yelled “Places” like the Mrs. in the opening scene of Mary Poppins, and everyone grabbed a magazine and ran to wave it under the smoke alarm, when it went off, which it did.

I love to see the family lore forming like this. You just know that ten years from now and far more able to reach the damn thing, they’ll still be vying to get their magazine to wave the fastest and stop the beeps. 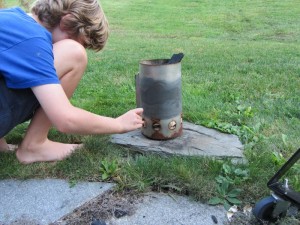