by KJ in Connecting the Dots, Feeding the Devils, Raising Devils

I uploaded the full, 11 minute long pasta making video I made for my cousin (minus the NYT intro) to YouTube. You should be able to see it above, but if not, it’s here. 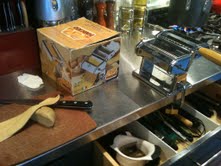 I posted a video and some thoughts about sharing a kitchen’s worth of ethnic heritage to the NYT Motherlode, and several commenters asked for the full recipe, so here goes. This is SO not in proper NYT recipe style! But it’s worked for years. Decades. Generations. I guess that’s the point.

Fry meat in butter with three garlic cloves, add salt, pepper. Remove garlic cloves after cooking. Add pinch nutmeg. When cool add beaten eggs, cheese, bread crumbs, mix well. Refrigerate at least an hour or over night. Can freeze extra filling, but do NOT defrost in microwaveâ€”let it defrost in fridge. I know, that seems obvious, but still. 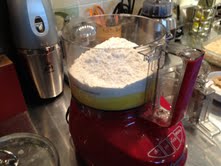 Mix eggs in mixer or food processor, add all flour, mix slowly until dough ball forms, then switch do dough hook and let it beat around a while. Take it out and knead it by hand, then leave it in the fridge until ready to use. At least an hour is best, but you can use it right away if you donâ€™t mind sticky. I should probably say I have killed two food processors this way, but this last one has hung on a while. 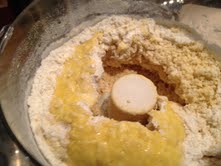 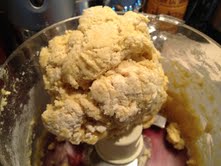 Ready to come out and knead by hand. 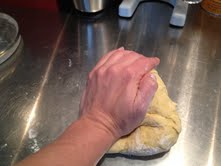 You can see another post on making pasta, with more detailed illustrations on rolling it (although I made spaghetti with it that time, but the dough is always the same) here.

You’ll have to watch the video for the fold, and you can also see my mother making the filling with me grilling her at every step (and you can hear how approximate the recipe really is, as she sits there going “well, I think I put in a cup of bread crumbs…maybe half a cup, it just depends) and watch me make a small batch of dough with her grilling me at every step (and me saying “well, I think I put in a cup of flour, it depends…). Or you can just make ravioli, which you make exactly like you’d think you’d make them. Fold the dough over the filling, cut, seal. Mom does that way at the end of the video, about minute 10. 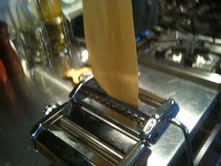 A perfect sheet of dough.

Cappelletti, I need hardly say, goes in soup. Any soup. Growing up, my mom used Wyler’s beef boullion cubes, which I can’t even spell now, let alone find, and I loved it them. I use boxed chicken broth, or very occasionally real soup, which is honestly too rich most of the time.

Ravioli goes in sauce. I make my sauce with a big can of Muir Glen diced tomatoes with garlic and basil. First I sautÃ© extra grated garlic, and maybe some grated onion, then I add salt, pepper and a pinch of sugar, and then I puree the hell out of it with my hand blender because I hate chunky sauce.

And that’s it. We freeze it in bags suited for a meal, I serve 8 ravioli to kids and 12 to adults, and figure 10-12 cappeletti each for soup. It lasts months, particularly if you have hoarding tendencies. Make a double batch of sauce, freeze half, and it’s practically an instant meal the next time. Loaf of bread, bottle of wine, you’re ready to go. I hope someone tries it. I hope my cousin Ashlyn tries it! 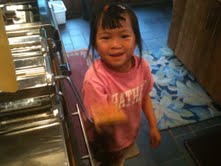 One Response to “Full Cappelletti (or Ravioli) Recipe from Motherlode”