This post could be all before and after shots. There was no behind the scenes at Motherlode last Sunday because I stayed up late transforming this: 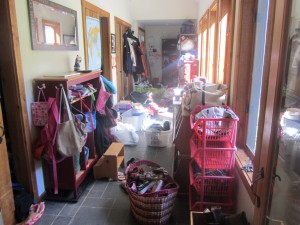 Our clutter-filled hall, mudroom and entry. 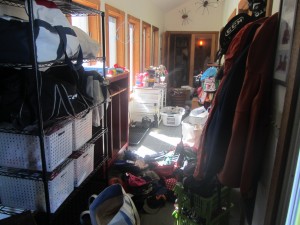 And then very eventually into this: 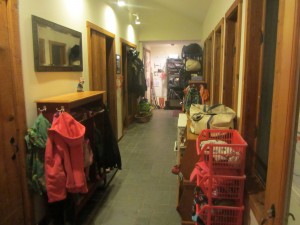 Note how dark it is in this image. It is late. Very, very late. Or early, depending on your POV.

I also transformed the kids’ room, with their help. But what really mattered to me this past two weeks was only partly about “going shelf by shelf” as Gretchen Rubin puts it, and mostly about my second mantra for the month of September: Get it right.

I have a confession to make: I do things half-assed. I’m impulsive. I fly by the seat of my pants. All the cliches that aptly describe your average flaky type? Yep, I do that. Leap before looking, the works. I’m a big fan of the jury-rigged semi-solution, the it’ll do, the good-enough-for-government-work.

But as our lives have eased up, the children have become big enough to be more self-entertaining and its just felt more like we had room and space to do a little better by ourselves and our family, I’ve found myself wanting to do that less and less.

You know that house, when you were growing up, with all the piles in the corners and the horrible soap dishes full of toothpaste and hair in the bathroom where you sometimes spent the night? That was my house, now. Not, mind you, the house I grew up in. No, in my mother’s house, things were right. The guest room was neat and had empty drawers. The pantry had places to put things. The bookshelves were neatly filled and the tchotckes (not a word I would have known growing up) grew light coats of dust and were then dusted weekly.

My house, as I said, was the gross toothpaste house. The house with the scary piles and the dark corners and the lopsided guest bed and the drawers that never quite closed because there was too much in them. Very little in my house was either neat or orderly or right. That, as much as the clutter, is what I set out to change this week. The house I grew up in was calm. You could sit and read, and look up, and not fear the pile of magazines on the coffee table or sense the ever-growing stack of dishes on the counter. During the day, it was bright, and dust mites filtered in the sunlight over empty rugs and couches without quilts and remote-control helicopters and the paper covers of books discarded on them.

I emptied and cleared all the gross bathroom drawers and lined them with white contact paper.

I cleaned two garbage bags of old towels and sheets out of the linen closet (and I guarantee to you that you will never, ever be short an old towel should you need one, still).

And I turned the guest room/playroom/kids’ dressing room (my 4 kids all sleep in one of the two upstairs bedrooms and keep their clothes in the other, along with some toys) into a place someoneâ€”my parents, say, especially if they were coming Wednesday, for example) would be happy to sleep. There are two cleared drawers. There are empty hangers. There is space for a suitcase, and an alarm clock, and an electric blanket. 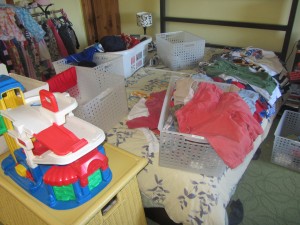 You can’t really tell, but the bed buried under all that crap is just a mattress on a frame. 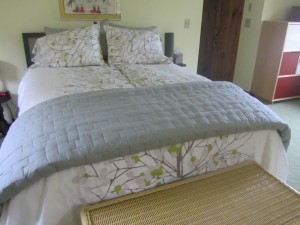 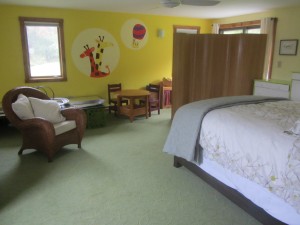 It used to be Wyatt’s room when he was a baby. I painted the giraffes. Guests will just have to try to appreciate them.

It’s still primarily a dressing room and a home for Sam’s slot cars–but now those are up off the floor on a board a friend made of foam core and six milk crates. Lily’s dolls, the other primary occupants of the room, are behind the screen, which can easily be moved. I’m so happy–it’s so inviting.

But I”m happiest that as I’ve done all of this, I’ve done it right. There isn’t one room where all the stuff moved out of all the other rooms lurks, waiting for me. It’s not all in the basement, although that space is anything but pristine, it’s not a catch-all. It’s not in the office or the guest room or anywhere. (actually, the Playmobil and a small basket of Little People are in the office closet, but neatly and intentionally there because it’s nice to have toys for very small guests in one case, and in the case of the Playmobil, because I’m hoping they will forget about it and I can give it away in a few months, but for now it’s in boxes and sorted and it can stay). There’s nothing, no toothpaste or otherwise, lurking.

I have two spaces to go: our room, which we’ve done within the past year and which shouldn’t be too bad, and the kitchen drawers (as opposed to the pantry) and a few cabinets–also not too bad, really. And now that it’s so close, I have no doubt I’ll get them done.

It seemed to me for a long time that it was impossible to get the house to a point where nothing lurked, but I kept looking back at my parents’ house and thinking, there were no secret stashes of slumminess there. You could go in any room and know what you’d find, pick up any item and know where it belonged. It was clearly not impossible. It only felt impossible.

I’m almost there, and what I’ve done has increased my happiness enormously. I enjoy emptying groceries into my reformed pantry. I like giving the living room a quick straighten at night. I like tucking things away in the hallâ€”and so does everyone else. The children don’t put everything away without being asked, but they put away a lot. I hear the older ones asking the younger ones to hang things up. I hear “Gross! Who didn’t wipe the toothpaste out of the sink!” And mysteriously, the laundry this weekend included eight bath towels, old ones or kids ones that live in their bathroom, way more than they’d use. And I watched the next morning as one of my children, after brushing her teeth, went and got a bath towel, carefully wiped out the sink, and put the towel in the wash.

Laundry or no, that made me very happy.

One Response to “Clutter-free (almost) and Happier: Check”