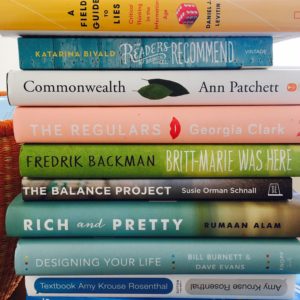 Here’s what I’ve been reading, and what I thought of it, in no particular order and with no goal of summarizing the books, offering a critical analysis or doing anything that might even remotely make any of us feel like we’ve returned to sophomore English class. I don’t even promise to use Times style here, people. Just a list of some books I enjoyed, and thought you might, too.

Hey–want next month’s list (promise: good gifts) to come straight to you? Be sure you’re signed up here. In a small Mailchimp incident, I deleted about a thousand emails (I like to think I transferred them to the Professor for Pokecandy, but the results haven’t showed up yet.) If you haven’t already seen this list, you were one of them. Fix that by signing up here!

In honor of Ann Patchett, this month’s links are all to the fantastic independent Parnassus Books, which I have thus far only frequented online, but which I hope to visit in person soon. So shop there—or enter to WIN all the books on the list, plus 4 more including one I tossed in frustration 10 pages in but hey, you might like it, here.

A Field Guide to Lies, Daniel J. Levitin This book should be mandatory reading for anyone who writes, reads, thinks … make that everyone. Levitin lays out all the ways statistics become “lies, damned lies and statistics” through the use of intentional, or just as often unintentional, use of incorrect descriptions and comparisons, graphics and charts that don’t provide full information, and a raft of other issues, most of which I had to read two or three times to fully grasp. Then he moves on from numbers to words, taking on slant, bias, fudging and just all the ways to tell that a writer hasn’t fully made the case for a given point. I can’t say enough good things about this. (I loved his “An Organized Mind” too.)

The Regulars, Georgia Clark Oh, this is just so fun. Three “regular” looking girls take a painful potion that turns them into stunningly beautiful people, with faces and figures that others can’t take their eyes off of—but, interestingly, not into the super-version of themselves, but essentially into someone who is, on the outside, entirely different. Which creates, as you can imagine, problems. Ultimately, great beauty doesn’t really turn out to be what any of the women thought it would be–not in a “what’s inside is what counts” kind of cliched way, but in a more interesting series of events for each of them.

Designing Your Life, Bill Burnett & Dave Evans I’m a sucker for a good “get a grip on your life” book (in fact, you could say I’m writing one) so I enjoyed this, and in particular the idea that you need to approach the things you want to change with a mind open to both small hacks and larger, far less obvious solutions—which they argue is how a designer thinks about problems. These guys teach a class in designing your life at Stanford (and online), which does mean this book skews younger than many similar titles, with both midlife and just-getting-started examples of people finding their course. They’re particularly brilliant on the idea of “prototyping” your supposed ideal futures, dream jobs and goals—giving, say, working in a bar a try before throwing your heart and soul into opening one—and on trying a choice on for size by settling yourself “all in” to one option (before you really commit) in order to see how it really feels to choose a job, move, school or road.

Commonwealth, Ann Patchett The characters in this book are just brilliant–fully formed, each a separate individual, believably who they’d be if they had the shared history of the book—that you can’t help but want to find out what happens to them, how they go on from where they were raised, what’s next. But it made me grumpy to read, because frustrating, sometimes agonizing things kept happening to the people, and I’d look up, all caught up in the frustration and agony of whatever, and yell at the poor child who just wanted to know if she could download another episode of “Kim Possible.” Eventually I had to decide to stay up late one weekend night and finish it so I could get over it.

The Readers of Broken Wheel Recommend, Katarina Bivald This might be my favorite of the pile, just for sheer audacity of plot—the idea that a youngish Swedish woman would plan to spend a month in a random Iowa town visiting a fellow book-loving pen pal is so random, and yet so sort of not-fantastic, that it just opens you right up to all the rest—which is a little romance, and a lot following assorted unusual characters (but not “characters”) as they change just a little when faced with the problem of what to do with this visitor. I’ve begun to realize this is sort of a recognizably Swedish story, this alien influence thing, and there’s something that feels Swedish, too, in the characterizations–lots of cold, tight people on the outside hiding things even when they take the lead as narrator. A fun read.

Britt-Marie Was Here, Fredrik Backman Another Swedish choice, although I actually thought it was taking place in England until someone paid for something with kroner. How to describe this one? The character at its center, Britt-Marie, never seems to realize she’s at the center of anything. She’s a closed book, even to herself, and washes up in a community in need of a soccer coach, which she is not. She never really becomes one, but she does become the core of a low-income team in a faltering community. I’m not sure I ever found Britt-Marie wholly believable in her refusal to show any emotion or reaction even to herself, but I enjoyed the book, the community it opened up, and especially the refusal to let it drop into an expected ending.

The Balance Project, Susie Orman Schnall Now, this is an all-out fun read,with that whole juicy life-on-the-inside-of-the-glossy world feeling you get from, say, The Devil Wears Prada. The assistant to a businesswoman who has written a Lean In style book on having it all has, of course, a perfect view when that whole having it all thing starts to implode. Any book called “The Balance Project” is bound to have a message about balance, and this one certainly does (the not-unexpected not everything is going to go perfectly when it’s all going at full tilt all the time), but it stays entertaining all the way through. It’s only failing is more of an oversight—the author seems to have been so caught up in the ways her two female main characters would explore their own questions about balance and “what do I really want” that she forgot to allow the male characters to do the same.

Textbook, Amy Krouse Rosenthal Can I have two favorites on this list? Textbook is a little indescribable. It’s a series of thoughts, really, of mini-essays and shortest-possible-musings about a life in mid-life that take the form ot texts, or chunks of textbook, or both. Krouse Rosenthal is both an author and sort of a multi-disciplinary creative artist who also has performance art, YouTube videos and my favorite children’s book, “Little Pea” to her credit, and she’s just fun to be with in these pages. She’s one of my imaginary I’ve-read-your-book-so-I-know-you friends.

Rich and Pretty, Rumaan Alam I normally don’t like books in which the protagonists firmly resist growing, changing or learning any lessons from the events that make up the story—but I liked this one, maybe because both women (one rich, and one pretty, and thus the title) were wholly realized from the very beginning, and felt so set in themselves that to have them change would have destroyed the very reason for the book. This is the story of how life flows around these two friends, so close that sometimes they aren’t quite friends, and how a shared history can become a character of its own.

Stay tuned for a Big Box of Books Giveaway of all of the above titles, plus at least one book I read only the first ten pages of before abandoning. And if you liked this email, please share with a friend! Because there’s always more to come. I mean, unless I get hit by a bus, but I’m optimistic.